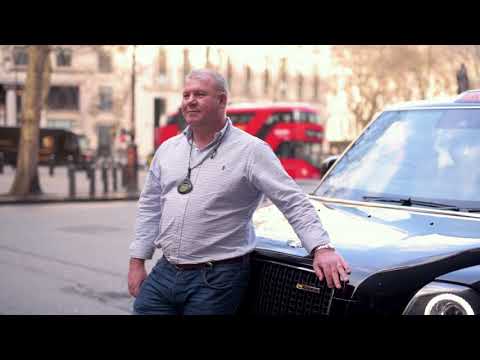 It’s a landmark day for London and its thousands of taxi drivers and passengers as the very first all-new electric TX taxi from the London EV Company (LEVC) has been handed over to a very eager and excited cabbie.

David Harris, 46, from Chingford in north East London has been a black cab driver for 21 years and was one of the first to put down a deposit for the new electric taxi when order books opened back in the summer of 2017.

Prior to being a cabbie, Harris was a professional tennis player, spending 40 weeks of the year travelling the world. These days, he tours the streets of London and in the new TX will be doing so in unrivalled comfort. As will his passengers thanks to class-leading wheelchair accessibility and features such as on-board wifi, phone/laptop charging, a much more spacious cabin with six seats, wide opening rear hinged doors, contactless card machines and an expansive panoramic roof.

Taking delivery of his new TX at LEVC’s Brewery Road headquarters Harris was delighted to receive the keys to the world’s cleanest, most advanced taxi ever, a revolution in the taxi market offering zero emissions motoring thanks to eCity technology comprising of an advanced battery electric powertrain with a small back-up petrol generator that gives a total range of up to 400 miles including 80 miles pure electric driving.

Covering the whole of London and generally starting his shifts at midnight, Harris expects to save £500-£600 a month by switching over from his current diesel cab to the new electric TX, in fuel savings, servicing and overall running costs. An EV advocate, even though Harris can’t charge his TX at home, as he doesn’t have off-street parking, he won’t be letting that put him off as he’ll incorporate a top-up charge into his daily visit to Heathrow, as the airport features a number of dedicated rapid chargers for electric taxis.

“I’m absolutely delighted to get the keys to my new TX electric taxi and there are two reasons I bought the cab. First, I can't wait to see the response from passengers, I know that they're going to love it. And second, I'm going to see some a significant savings on running the electric taxi. Even though I can't charge the vehicle at home, I should be able to charge the cab once a day at Heathrow. Combined with lower servicing and overall running costs, this means I should end up £500-£600 a month better off before I even go out to work." ​

“It’s a momentous day for LEVC and the TX. It’s the first of many clean-air, zero emission taxis that will be hitting the streets of London, and we are just as excited as David is. Hearing how this vehicle will impact his life, and the vast savings he will make month after month, is just fantastic. We can’t wait to see and hear the reaction from passengers as they experience the new TX for the first time.”

Unlike the previous taxi, the vehicle’s multi-filter system works to remove gases and particles from the incoming air. In addition, an in-built air quality sensor also automatically closes the external air intake if it detects increased levels of pollution in the outside air – protecting passengers, and the driver, from the capital’s often poor-quality air.

World-class active and passive safety systems will help to protect both the vehicle and other road users too. These include forward collision warnings, autonomous emergency breaking and emergency brake assistance, while the TX combines an extremely strong, rigid aluminium body shell with crash protection to the highest international standards, reinforcing the black cab trade’s reputation for safety.

Underpinned by an investment totalling £325m, LEVC, a wholly-owned subsidiary of Geely, has the single-minded ambition to be the urban commercial vehicle provider of choice for cities across the globe. Its commercial vehicle strategy will see the new TX launched first followed by an electric LCV. ​

LEVC in the USA

View Our Taxis We’ve always ranked highly
Book a Service Our trained technicians and mechanics are on hand to service your black cab.
Book a Test Drive Book an appointment with your nearest dealer.
OFFERS View our latest offers on a new or used taxi

Back
Book A Service
Compare Saved Vehicles
Top
Close
Your Cookie Settings
Select your cookie settings
Strictly Necessary Strictly Necessary cookies are essential to let you move around the website and use its features, such as accessing secure areas, shopping baskets and online billing. These cookies allow our website to provide services at your request.
Performance Performance cookies collect information about how you use our website e.g. which pages you visit most often, and if you experience any error messages. They also allow us to update our website to improve performance and tailor it to your preferences. These cookies do not collect any information that could identify you - all the information collected is anonymous. They will not be used to target adverts to you on other websites.
Functional Functionality cookies are used to remember the choices you make, e.g. your user name, log in details and language preferences. They also remember any customisations you make to the website to give you enhanced, more personal features.
Targeting Targeting cookies collect information about your browsing habits to deliver adverts which are more relevant to you and your interests. They also measure the effectiveness of advertising campaigns.
Save Settings
Cancel Changes

Your settings will take affect when you refresh the page or move to a new page. Find out more about cookies